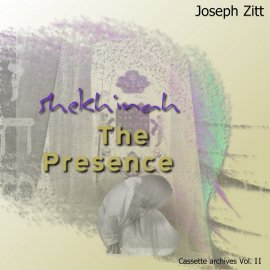 Selections from the score of the 1992 dance/theatre work Shekhinah: The Presence, as first performed in Austin, Texas. With the exception of environmental sounds captured in "Jerusalem Circuit", the sounds consist entirely of human voices, sampled and processed.

The structure and materials of Shekhinah: The Presence are derived from the morning Shacharit service. The entire score is made up of voices and derived in various ways from the texts and melodies of the service.

In performance, the text, rather than the music, serves as the score by which the dancers organize their movements. The music creates atmospheres for the performance, functioning like the soundtrack to a movie.

Opening (2:45): Chris Kelly recorded about thirty repetitions of a brief melody constructed from fragments of melodies from the service. Eight unsynchronized tracks of her singing form a cloud of voices that gradually clears to reveals the single simple melody.

Halleluyah (6:13): I sampled four people speaking the word "Halleluyah", then, breaking each sample into distinct syllables, played the voices in superimposed rhythmic patterns on a keyboard. Andrea Jacobs sang a traditional setting of "Halleluyah" over it, which I passed through a harmonizer to create a second voice moving in parallel fifths to her original line. (This track grew into the performance piece "Halleluyah Ketjak" which I later performed solo and with the Cornelius Cardew Choir and other groups. The score appears in my book Surprise Me With Beauty: The Music of Human Systems.)

Bor'chu (6:10): I spoke the line Bor'chu et HaShem ham'vorach ("Bless the Lord who is blessed") into a delay unit and set it to looping and

panning about the space, resulting in a sound reminiscent of Steve Reich's early works. To create the vocal melody above it, I played the tape of my earlier drone piece "Gentle Entropy" through a harmonizer, varying the pitch with a MIDI keyboard.

Torah Reading (9:39): To create this piece, I first recorded the Haftarah portion (a reading from the books of the Prophets) from my bar mitzvah, bracketed by the appropriate opening and ending prayers.

Manu Jobst then created three tracks of vocal improvisations while listening to the source track. She had not heard the material beforehand, nor did she speak more than a few words of Hebrew (in which the original was sung), but she skillfully interwove fragments of the original into the improvisations. As originally planned, she recorded the first two tracks listening only to the source track, without hearing her first improvisation as she overlaid the second. At her suggestion, we did audibly play back the two improvisations as she recorded the third, to give the result greater coherence.

This final version combines her layered improvisations but omits the source recording, creating a tapestry of her voices with aspects of the original materials woven into it.

Jerusalem Circuit (10:31): In the summer of 1986, I recorded several hours of field recordings at the Western Wall in Jerusalem. This piece processes chance fragments of those recordings through reverb, both forward and reverse, in several layers, complementing the hallucinatory internal monologue of the solo dancer onstage.

Whispering Psalm (1:07): In traditional services, a cantor often begins a text then trails off, letting the members of the congregation proceed through it at their own individual speeds, then audibly completing the prayer when most of the voices are finished. This recording recreates this texture with layered readings of Psalm 48.

Closing (5:14): Chris Kelly's recording of the melody from the opening returns, here building back up from a single voice into the cloud of voices that concludes the performance. Over those voices, Andrea Jacobs speaks the closing monologue as the voice of the Shekhinah.

This album was recorded on four-track cassette between 1990 and 1992 in Austin, Texas.

Cover design by Bobby Corbell from a photograph by Matthew Sharlot.